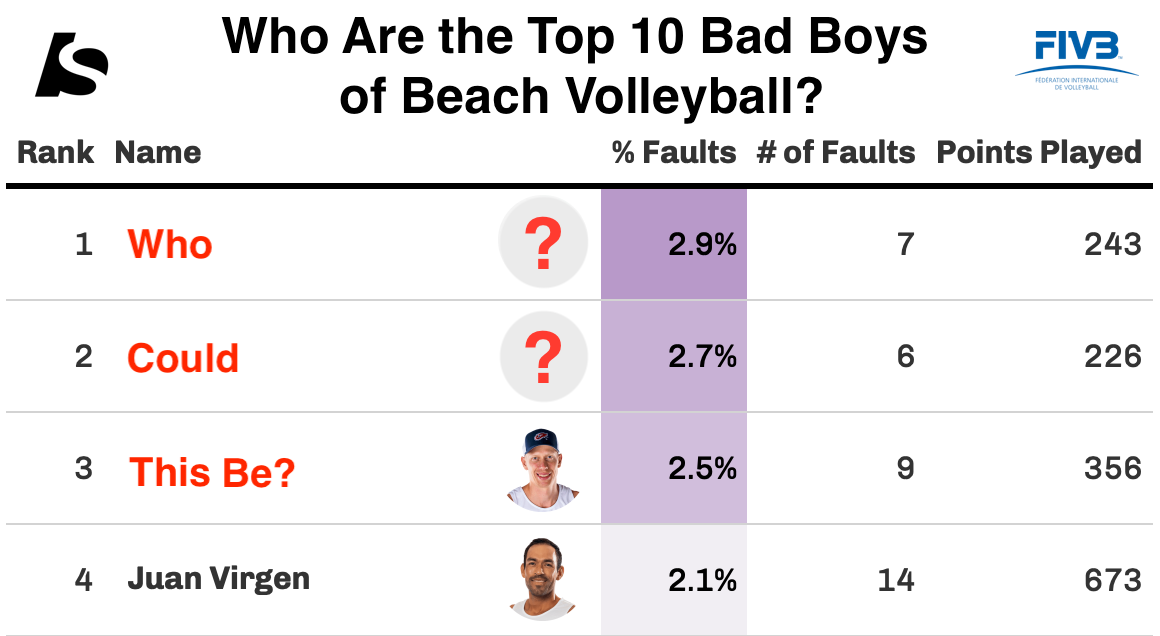 Beach Volleyball has a different kind of vibe than the respectful, hushed crowds of tennis or golf. Smack talk, intimidation, flexing, and gamesmanship are fairly common. But how can we quantify the biggest, baddest players of the game? While not perfect, I judged “bad boys” and “bad girls” based on illegal actions called by referees. This “% Faults” ratio identifies the likelihood that on any given point a player might commit an illegal action which is called by the referee.

Both Doherty and Walkenhorst are the blockers on their team and get served relatively few balls. This requires them to set often, including on transition defense, which means they likely have more attempts at hand setting than the average player. It’s great to see them continue to hand set even in the face of the referee calls. Plus, they’ll gain even more of an advantage as the AVP and FIVB continue to loosen the restrictions around double touches and lifts.

When comparing the distribution of faults between men and women, there are many more players on the men’s side with fault percentages over 1.5%. This is similar to what we saw in our Battle of the Sexes analysis, where women had less lifts, double touches, net touches, 4 touches, and reaching beyond calls while having more foot faults.

More women are on the left hand side of the distribution than men, achieving totally fault free gameplay.

Next week, we’ll look at the top players with fault free play. Be sure to subscribe so you don’t miss out!

Join 21 other subscribers
My Tweets